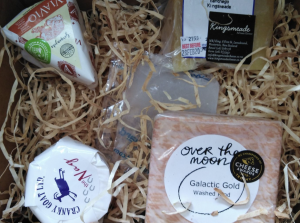 Happy holiday season and thank you for your support! This is huge to us and the Aotearoa cheese makers. A couple of reminders:

Our special Christmas cheese box can be purchased from our website. Your January box will be dispatched on Thursday 16th January.

GALACTIC GOLD – FROM OVER THE MOON

A magnificent cheese! Galactic Gold is a peak cheese in Aotearoa. It’s a washed rind i.e. once they are put aside to mature they are washed in brine very few days which helps their flavour to develop. This is the epitome of the “smelly socks” style, and if you let this one to mature for a while longer you’ll be able to smell it from a couple of rooms away. It’s orange and the rind is often a little sticky. The flavour is other-worldly, rich, aromatic and, well, absolutely delicious. The texture is reminiscent of a good camembert, creamy, soft and oozing. Sue Arthur opened her Over The Moon boutique factory in Pūtāruru in south Waikato in 2007. They make a wide array of specialty cheeses from locally-sourced cow, goat, sheep and buffalo milk, and have won countless awards.

Manchego is one of Spain’s great cheeses. It’s made in La Mancha region (made famous in Don Quixote for the literary minded), and it’s made from ewe’s milk of the Manchega breed. It’s firm and compact, and usually aged for 60 days to two years. The Kingsmeade Manchego is typical, with a hard rind and more supple on the inside. It has a dry texture and is a bit salty and caramel tones in the background. Perfect for the summer cheeseboard. We love working with Miles and Janet King from Kingsmeade. They started experimenting with artisan cheese in the Wairarapa in 1998, initially with sheep’s milk. Over 20 years on, they make 14 handcrafted cheeses using milk from their own ewes and from cows on nearby farms. Their cheeses consistently win awards. From the beginning, sustainability has been a core value, and Kingsmeade is a previous winner of the Wellington on a Plate Sustainability Award.

THE NAG – FROM CRANKY GOAT CHEESE

A beautiful soft white rind that’s been lactic set and matured for 10 days. White cheese is formed by a combination of mould (Penicillium candidum, Penicillium camemberti), yeast, or yeast-like fungus (Geotrichum candidum) that blooms like tiny flowers on the exterior of a ripening cheese. Over time, these patches of yellowish white fur are patted down to form a cohesive skin, or rind, on the cheese’s surface. This live rind breaks down the fats and proteins of a cheese, causing an increasingly creamy to runny texture over time. This is why you may encounter that glistening layer just under the rind, which is called the creamline. The Nag has slight cabbage taste; its centre is light and fluffy. As this cheese matures it takes on a rich intense mushroomy flavour and the centre becomes more of a gooey paste. Cranky Goat cheese owner Simon Lamb has only been in the business for three years, having spent most of his earlier life jumping out of planes as a Royal Air Force Regiment parachutist.Together with his wife Hellene, and daughter Hannah, the trio are putting the Kenepuru Sound back on the cheese making map.

“We are trying to take people back to how cheese used to be made. Cheese making is not difficult but can be frustrating and challenging,. Artisan cheese making is 60% science and 40% artistic. Not everyday is the same, you can be doing the same thing one day, and the next day it all changes.”

Gorgonzola is the Italian version of blue, and sometimes could more accurately be called blue-green. It tends to have a more delicate flavour than the bolder northern European styles. The Viavio certainly fits that mould (haha) and is also typical with the mould occurring in patches, being super creamy and often having a thin, sticky rind. It’s a wonderful addition to the artisan cheese scene in Aotearoa. We featured a Viavio cheese in our November box, so you’ll remember that they’re an artisan cheesery in Nelson founded not long ago by Flavio and Flavia, an Italian couple. We love the story around their name, which is a portmanteau of their first names, and their branding is completed with our local four stars of the Southern Cross.