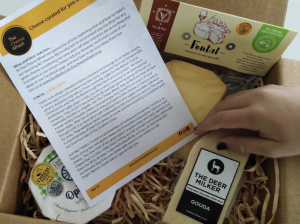 At The Cheese Wheel we spend a lot of time exploring wine and beer to match our stunning NZ cheeses. We’re reluctant to recommend any one drop for any given cheese considering our wine and craft beer industries are as exciting and innovative as our artisan cheese industry. However, we’ll share some of our ideas on our Facebook page, and we’d love to see your ideas there too. Join us at www.facebook.com/thecheesewheel.co.nz

ViaVio is an artisan cheesery in Nelson founded not long ago by an Italian couple.

In some ways it could not be a more Kiwi story. Flavia and Flavio are Romans who came to Aotearoa originally so Flavio could play rugby for the Belfast Club in Christchurch, and then the Marlborough Red Devils provincial team. He was a professional rugby player in Italy, but also a senior executive for an international company. They couldn’t stay away from NZ and their growing group of friends, so eventually decided to migrate. Like The Cheese Wheel, they worked out that we lack a wide variety of quality cheese. Unsurprisingly, they homed in on a lack of local Italian styles. After lots of research they purchased a little cheesery in Nelson which brought with it an association with Oaklands Farm who supply traceable milk from A2 cows. They added an Italian cheesemaster to the mix and ecco domini! The name is a portmanteau of their first names of course, and their branding is completed with our local four stars of the Southern Cross.

Just like “ViaVio”, Fontal is a portmanteau of Fontina and Emmental. Fontina is an Italian strong raw milk alpine cheese and Emmental a Swiss yellow, medium-hard cheese. This love child of two great styles is a pasteurized, semi-hard, washed rind cheese that is a little milder than Fontina, but still aromatic and buttery. ViaVio age theirs for 30 to 60 days. It also melts beautifully, so if you can find some wild mushrooms they’ll be even better with some Fontal melted on top.

DEER GOUDA – FROM THE DEER MILKER

A world first! Recently featured on Country Calendar, The Deer Milker is another project by South Canterbury cheesemaker Paul Fitzsimons. In collaboration with a local deer farmer, he is experimenting with the world’s first commercial deer milk cheese. It’s been quite a journey working out how to scale milking deer and how to make cheese out of hind’s milk, which has quite different properties to that of other animals. Deer milk is currently only produced in small quantities in the South Island. One description is “perfectly smooth, astonishingly light, with exquisite flavour”, and this seems to be translating into deer cheese. This Deer Milk Gouda shows it’s been well worthwhile. It is unquestionably from deer, exhibiting musky tones under the classic gouda features. It’s distinctively white, and a little crumbly. A very exciting addition to the burgeoning NZ artisan cheese scene.

Even more than most soft white rind cheeses, it’s so important to eat Opiki Ma when the cheese is ripe. Wait until it’s obviously soft then leave it somewhere warm, even in the sun, until the paste is oozy. Your reward will be heaven on earth. This is a goat milk cheese with an amazing texture like velvet. Cartwheel Creamery is another artisan cheesery run by a couple in the Pohangina Valley northeast of Palmerston North.

We are including two soft white rind cheeses this month, but they really are quite different. The Origin Earth Camembert-style has a yellow paste for a start, but it also shows how different a soft white rind made from cow’s milk is from one made from goat’s milk. This is wonderfully soft and creamy and the mould has a touch of mushroom.